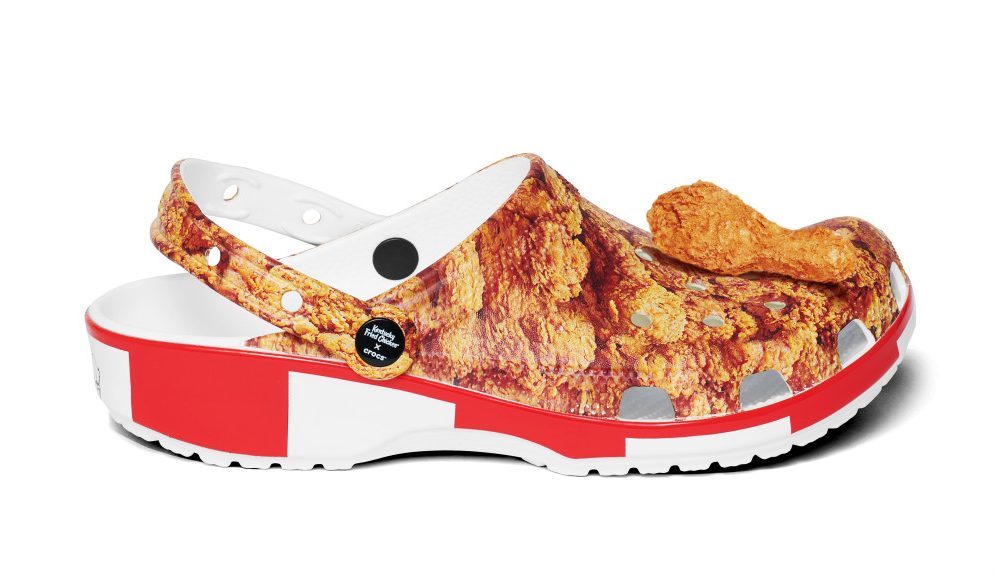 Kim Kardashian has the Midas touch and many of us have fallen for her fashion sense. Proof: The KFC Crocs are now considered cool because she wore it, even posted it on social media – and that, ladies and gents, is a stamp of approval like nothing else. KFC bucket of chicken.

Contents show
1 KFC Did It Before
2 Pizza Hut Has Its Pie Tops
3 Dunkin’ Donuts Also has a Shoe Line
4 Momofuku Teamed Up with Nike, Too

What did Kim think of the KFC clogs? She called them “amazing” and you may or may not agree with her. She even pointed out KFC’s current testing of the vegan Beyond Meat fried chicken, and we’re glad she did. She also said that while she ate a chicken drumstick when she visited KFC in Paris, she says that she’s mostly a vegan, especially at home.

But these KFC Crocs aren’t the first and will not be the last collaborations between the restaurant industry and the fashion industry!

KFC Did It Before

KFC sold merchandise that appealed to the fashion-conscious market in the past, too. The merchandise included a $12 gold chain with the words “Finger lickin’ good”, its long-time slogan; a $30 baby blue shirt printed with tiny drumsticks in a grid pattern; and a $75 yellow sweatshirt with the words “Fried Chicken USA). These were sold for a limited time but were also re-introduced during the holidays.

The “fast-food on clothes” concept makes sense. Food and clothes are among the essentials for man to live so if you can tie up the two, while also promoting the brand, then it’s a win-win scenario. Besides, there are die-hard fans of the fried chicken-centric chain so selling them brand-specific merchandise feeds their love.

Pizza Hut Has Its Pie Tops

Not to be outdone, Pizza Hut also released its Pie Tops in 2017. Pie Tops are sneakers that were developed along with Dominic Chambrone, a.k.a. The Shoe Surgeon.

While these are regular sneakers, these are essentially basketball shoes that can be ordered at the same time as pizza. While the first iteration wasn’t an actual product, the second iteration was made available for purchase. But it was made only in 50 pairs and in two versions, namely: red and wheat colorways.

In honor of the Boston Marathon, Dunkin’ Donuts and Saucony also created shoes for runners. Of course, the shoes were designed to evoke the coffeehouse chain’s famous breakfast treats – donuts. These were also limited edition shoes so if you were lucky enough to get them, then you may want to preserve them for as long as possible.

The Dunkin Donut shoes are actually based on Saucony’s Kinvara 9 shoes but with a few tweaks. The shoes have a fun print evoking rainbow sprinkles falling off a strawberry donut, the DD branding on their tongue, and the tagline “America Runs on Dunkin’” on the heels. These are available in men’s and women’s sizes, too.

Momofuku Teamed Up with Nike, Too

David Chang isn’t just a chef – he’s also a fan of Nike, the giant shoe brand. So, when he teamed up with Nike to produce the Nike SB Dunk High Pro Momofuku, we can surmise that he was over the moon about it.

These were high-top sneakers in dark gray, the color of the Momofuku aprons, with the restaurant’s signature peace logo. These also featured the visible Nike Air cushioning technology.

Even McDonald’s, already a fast-food giant with toy merchandise of its own, has its Big Mac Shop in Sweden, which opened in March 2015. The shop offers rain boots and drawstring raincoats with – what else – burgers as prints. The chain has also sold totes, caps, sweatsuits and onesies with burgers as prints because, well, one can’t have enough burgers.

Coca-Cola released its sneaker duffel and sneaker sling backpack in collaboration with Hex; Taco Bell teamed with Forever 21 to sell shirts and bodysuits from skinny to plus-size bodies; and a Toronto A&W restaurant raffled off Off-White x Nike sneakers.

But it isn’t just the well-known fashion brands that have used the restaurant industry’s brands and images for inspiration. Look around and you will find plenty of fashion designers who take a similar path as KFC, Pizza Hut and Dunkin’ Donuts.

There’s Leeann Huang, for example, whose edible garments are considered innovative. Her clothes can trick the senses in that observers cannot immediately decide whether these are made of real food or not. Her jelly and chocolate knits as well as her beaded trousers with oranges and walnuts cast in resin were a hit.

Going back to the KFC Crocs, we have to say that these aren’t as appetizing as the real bucket of fried chicken. There’s something clunky about them that gives us a second thought about wearing them anywhere, not even during rainy days.

But hey, if it looks good on you, then wear them! After all, food and clothes will always be a matter of personal preference.

Soft Serve and Its Differences with Ice Cream
What’s New at Panera Bread? Here’s What You Need to Know