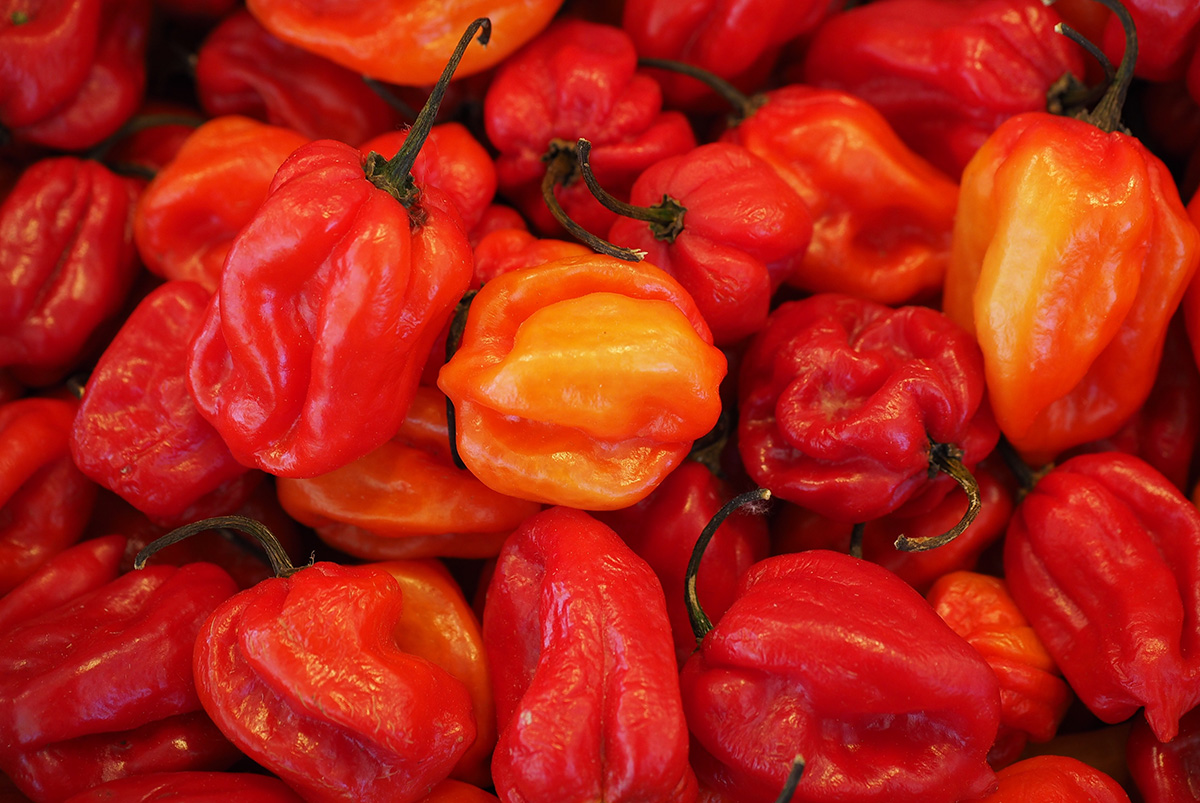 The Hierarchy of Heat Among Peppers

The Hierarchy of Heat Among Peppers
Restaurant Staff

What may be the burning hell of peppers for you may only be the gentlest of heat for others. Don’t be ashamed about it, if it is true, because every person has his or her own level of spice tolerance.

Fortunately, restaurants acknowledge such a fact and, thus, offer spicy foods with a wide range of heat levels. For example, the East Coast Wings + Grill has sauces with heat levels ranging from mild (Virgin) to extreme (Insanity).

But how hot is hot? When it comes to peppers, there’s a relatively objective tool in measuring their heat and it’s called the Scoville system. Here’s what you may want to know about it and the heat measurement for many of the most commonly used peppers in the United States.

First off, the heat that comes from eating spicy peppers comes from capsaicinoids, the chemicals released by peppers as a deterrent against being eaten by animals and fungi. Capsaicin, a thermogenic compound that also improves the body’s fat burning capacity through heat generation, is among the numerous types of capsaicinoids that bring on the heat, so to speak.

The Scoville scale measures the pungency – in other words, the heat or spiciness of pepper – based on the concentration of capsaicin in a certain type of pepper. The pungency is measured in Scoville units from zero to more than a million. Thus, sweet peppers like banana peppers are at the bottom of the scale with zero Scovilles while pure undiluted capsaicin is at the top of the hierarchy with 16 million Scovilles.

The Scoville scale was named after its creator, Wilbur Scoville, a pharmaceutical employee who devised a test for measuring the levels of capsaicin in peppers. He developed his hierarchy of heat in 1912 and it’s still widely used today despite its subjective flaws. But for a more precise measurement, scientists use high-performance liquid chromatography, a more expensive way.

The Popular Peppers and Their Heat

Chili and cayenne peppers are the most popular type of pepper used in spicy dishes in the United States. But you will be surprised to know that there are literally dozens of types that are used in cooking as well as a garnishing. Here are a few of them and their Scoville heat units (i.e., stated inside the parenthesis).

The mild, sweet taste of banana peppers, or yellow wax pepper, makes it a popular choice for people who have low spice tolerance. It’s used on several foods including Greek salads, pizzas and sandwiches, as well as stuffed in cheese and meat since these add an interesting combo of sweet and spice.

These are actually smoked and dried red jalapenos so these have similar Scoville heat units as fresh jalapeno peppers albeit with a different flavor profile. Did you know that to produce one pound of chipotle pepper, about 10 pounds of jalapenos will be needed? Don’t be surprised then that the former is generally more expensive than the latter.

Jalapeno peppers originate from Mexico although it’s now grown worldwide for its mild heat level averaging around 5,000 SHU. Think hot but not too hot. It’s a medium-sized pepper that can grow as long as six inches although its average length is 2-3.5 inches.

These are usually used in Middle Eastern and Mediterranean cuisines due to their rich fruity undertones and moderate heat. Named after the Syrian city, it’s usually dried and crushed before being used in cooking, sometimes as a substitute for paprika or crushed red pepper.

These are typically used in their dried and ground version (i.e., powder) that can be drizzled over soups, sauces, and pizzas. In their natural form, these are thin peppers with colors ranging from green to red and measuring 3 to 3 inches long.

These have a similar appearance as the cayenne chili peppers but be warned. These peppers are twice as hot so these can set your mouth on fire, figuratively speaking.

These deserve their name so be careful about eating a dish filled with them. These are used in stews, soups and hot sauces that are fit for people with high spice tolerance.

These are so hot that few people can handle eating them in their raw form and we don’t suggest eating it if you have hypertension, among other health issues.

When ordering spicy sauce for your chicken wings, you may want to ask about the type of peppers used in and the heat intensity of the sauce. You want to know what you’re putting in your mouth and you will want a coolant, such as a cold glass of milk on hand, before diving in to your food.